Kythira is the opposite of Mykonos: lavish green instead of sunburnt yellow, solemn and empty instead of busy and packed, rural instead of commercialized. (It is also about one third price of its well-known contender, which is worthy of consideration in the middle of summer). I love Mykonos too, it is just a very different kind of holiday: festive and trendy instead of quiet and authentic. The only common point between the two is the azure waters of the Mediterranean Sea. Mediterranean will always be the best sea in the world for me. And I keep on thinking, all the world known islands on this sea: Mykonos, Sardinia, Santorini and Ibiza, of course, used to be like Kythira some fifty years ago. Pure, savage and empty, open only to the eyes of people who wanted to wander into the unknown looking for beauty.

Diakofti beach, the one with the only 4 star hotel on the island, Kythira Golden Resort, is the Côte d’Azur of the island. Is it primarily famous for its white sandy shores, the only beach of this kind on Kythira. The ship, sank according to the hotel owner, by the drunk Russians and now the famous landmark of the island, is a pleasant sight. Diakofti is also known as the best family destination, so we admired it for a moment and kept on driving.

Here is a sacred map of the islands’ treasures. I kept it because there is no chance of getting a better one on the island (or maybe even another one). Given to us (as you can see by a subtle product placement) by the same lady at the same hotel, it has all of Kythira’s beaches: the stony and hidden Chalkos, the lively and touristic (if the word touristic is applicable to Kythira at all) Kapsali. There is Firi Ammos (two of them, actually) with its secret lake Kaki Lagada and Kaladi with its 150 stairs. And Avlemonas, with gorgeous and unusually deep waters, surprisingly cold in early June.

I would keep the map, too, if I were you: it also has the island’s best restaurants on it.

Chalkos, the stone beach almost invisible from the high mountain road, is Sophie’s favorite. Its only bar, comfortably tucked under the palm trees, was still closed when we got there. As most island beaches, this one is for the locals. And they do enjoy it, coming with carry on fridges filled with watermelon, wine and oh-so-good Greek ice coffee. 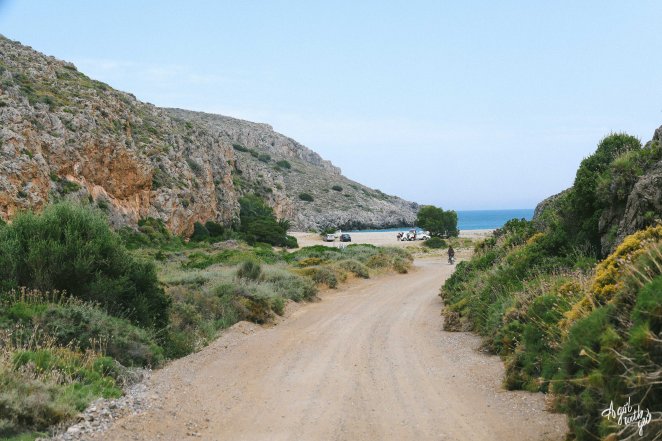 The stones and azure of Chalkos, Kythira, Greece

Kapsali is the touristic beach of the island, with people being brought to it by buses (even though the bus driver keep the beach location their most precious secret and refused to reveal it to us on multiple occasions). In fact, there are two beaches, on the two sides of the same bay (one side even has several – and I really mean, few – sunbeds). Kapsali also has many cafés and bars, – you will be happy you stopped by. 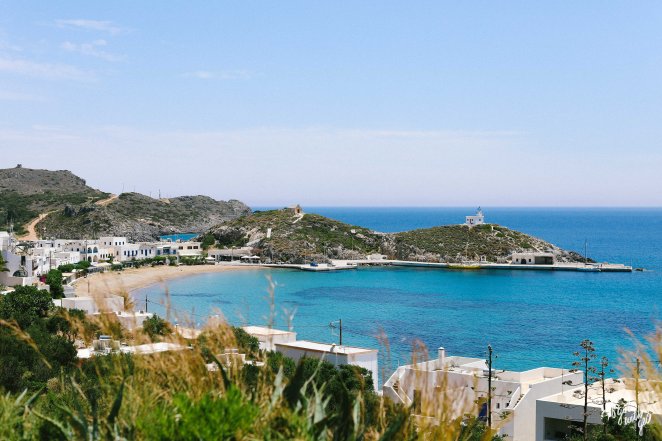 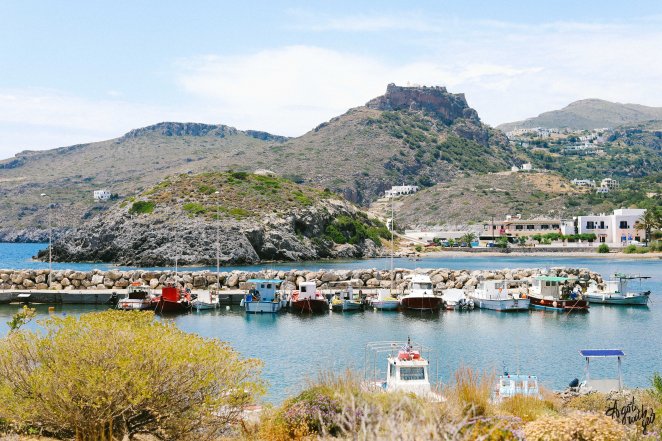 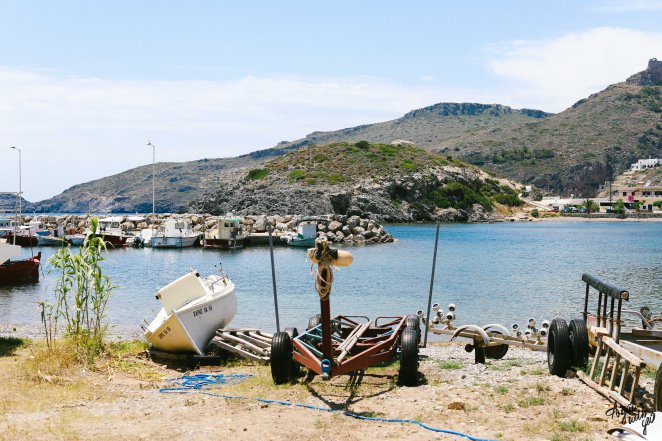 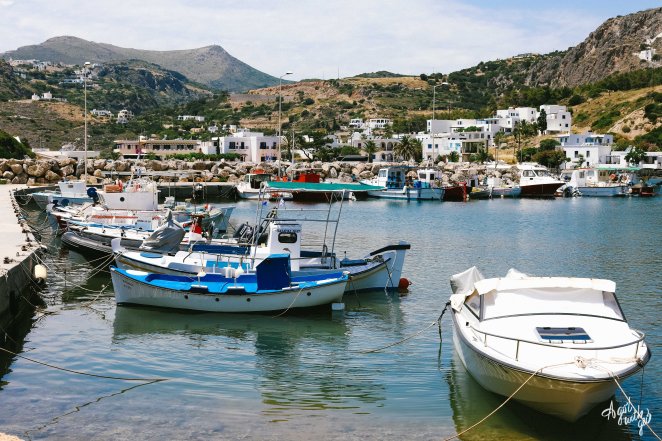 Now, Firi Ammos beach (there are two of them at Kythira, I am talking about the one in the north) is my favorite. Not only is has a gorgeous mountain view, super comfortable leather sunbeds are certainly a gigantic plus. Funny story with those sunbeds: we were at Kythira the first weekend of June. The beach was not officially open yet, the guys (who, I guess, are also the owners) were just setting it up. So they let us use the sunbeds for free, brought us water and refused the money Sofia offered them (she still left the money, Greek mentality vs Greek mentality). I was thinking about 150 EUR for 2 beds/ day at Portofino (and how surprised Sofia was then) and my heart sank with sorrow that I hadn’t discovered this place before. No wonder it’s on the top of my list. 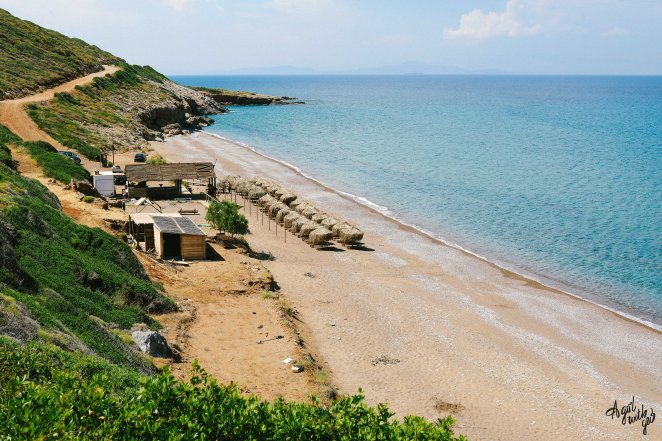 An extension of Firi Ammos, Kaki Lagada, is only reachable by foot (or by a solid 4×4 which we did not happen to have). A somewhat 15 min walk brings you to an absolutely deserted beach with a sudden lake at your back.

A panorama of Kaki Lagada at Kythira, Greece 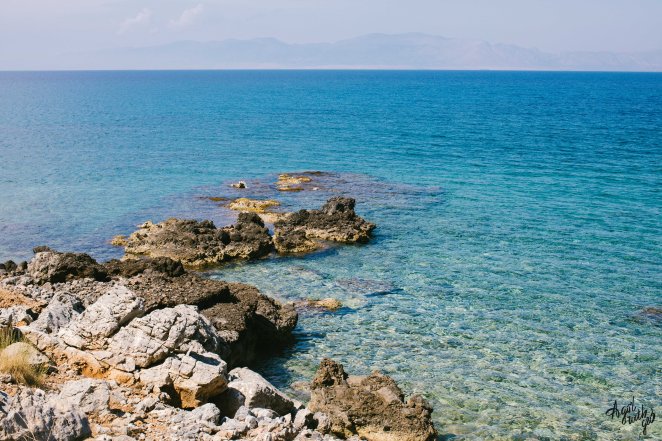 A panorama of Kaki Lagada at Kythira, Greece

Kaladi beach is for the brave at heart – and also for the young ones. It takes 150 stairs to go down to it – “But you are young!” as the legendary (at this stage) hotel lady told us. So we did: one last dip before chasing the sunset.

There are also numerous hidden beaches, absent from the maps and known only to the very locals. One such beach we found at the bottom of then church Panagia Orfani when chasing sunset. At this point, we walked some good 30 mins from the church itself to catch the sun melting into the water. Coming towards us, there was a couple with an obviously upset lady on wedge shoes. From what I understood from the agitated and gesture-rich discussion, the beach was another 1h walk or so. The couple did not know for sure, eventually they gave up and turned back. 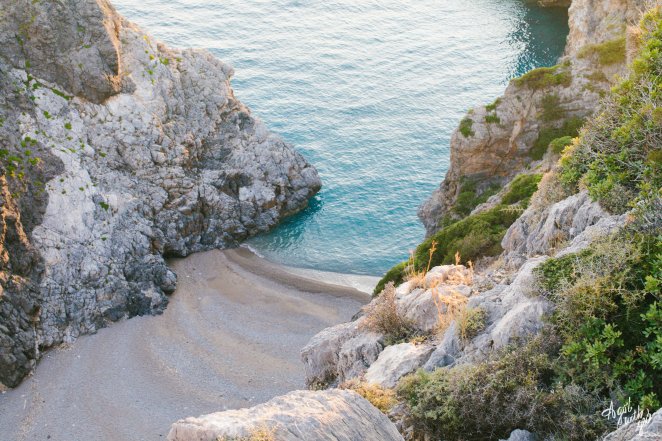 A hidden beach at the bottom of Panagia Orfani church

Some nameless beach of Kythira, Greece

Some nameless beach of Kythira, Greece

Now you know all you need to know about Kythira beaches. Would you jump into the adventure and go? I certainly plan on coming back.