October is an exciting time for me at work. I start new projects, bring up new topics to the discussion on Digital Innovation, and even introduce a couple of new full-bred solutions. I fly for weeks straight (actually, I am set to fly through the entire month), and put all my energy into my job. Then comes a weekend. During the week, I am looking forward to it as a time when I can finally switch gears and create, read, do sports. I somehow picture it as 48h charged up with useful and exciting activities for which I can’t set time aside during the week. And then, on Saturday/ Sunday I spend most of the time in my pjs, watching series, ordering food and doing rare bicycle gigs around the city, mostly to go to the movies. (I do read books though.)

I now I think it it’s okay. I used to feel sorry for these unused stretches of creative time, but then I got to a point in my life when I understood the value of planned downtime (hello, “How to Have a Good Day” by Caroline Webb). This time around, I am embracing my racoon weekend personality, swiping the dust from my August photos (made with Fuji, by the way, my go-around-the-city camera, instead of my Canon 5DIV), to spread some more love for South Korea, the country of my eternal vacations.

This post captures my visit to a racoon cafe in Busan, South Korea. Today Korea – a small country with no natural resources and a landscape made up by 70% of mountains – is one of the world’s leading economies. I have been coming there for 13 years by now, and could witness their economic ascent. I gave a lot of thought about what made Korea what it is now, and being humble and eager to learn is one part of it. Take Apple vs Samsung battle. Some years ago, Apple used to be the number 1 phone in Korea, the high earner’s trade mark and a sign of (be)longing to the Western sophisticated civilization. Most of what Samsung did these days was to mirror Apple’s design and functions, first to a very modest success. With years, Samsung caught up with Apple, offered their own progressive techs, and now very few people in Korea still have an Apple device. Samsung there is all the rage now (despite the fact that Apple offers a very appealing price level in Korea).

The same about animal cafes. Koreans have been excited about cat cafes, even launched a few dog cafes (where dogs are wandering and playing around, not what you could have thought), and now introduced a racoon cafe.

“Racoonamatata” is a cafe in central Busan, in the old part of the city where you can barely pass along the narrow streets with your big Korean car, and parking space is scarce. It self advertises as “Coffee & Dessert. Play with racoon”, and that’s a very fair promise of your upcoming experience. Everything inside, everything you can buy at least, is racoon-branded. Smoothie cups, coffee mugs, cookies. The prices are a little bit higher than in usual coffee shops with no furry animation, at a very fair level.

Once you go through the instructions, you are allowed into the special part of the cafe where the racoons rock and roll (the three which started the cafe and two new comers, in a special adaptation section). With visitors bringing special food packs available to purchase at the cafe, life is a paradise for them here, and you don’t even question that. Just look at them. 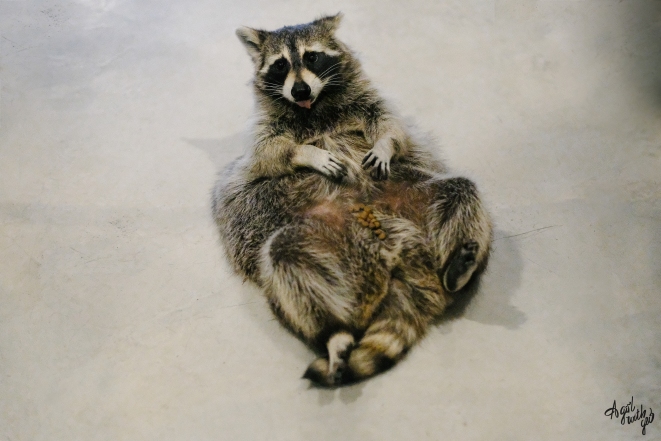 Obviously, we were very happy, too. I can’t stand zoos and other places where animals are kept sad and captive (and I don’t go there), but here the narrative was very different. The racoons are totally used to people (even too much, jumping around you on their rear feet asking for food, when in the mood to have some more. Or passing out in the most peaceful sleep just next to you). So you can pet them, hug them and play with them, at a modest risks of getting some unintentional scratches in a process. The cafe gives out blankets to wrap around yourself, too. Drinking reservoir at the Racoon Cafe in Busan, South Korea.

The cafe is very well built for the animals. Doors with double protection so that the kids don’t let the animals out by mistake, lots of climbing and playing surfaces, water available 24/7 in special tubes, – if racoons are familiar with the notion of paradise, that would be it.

Wearing a protective blanket against unintended signs of racoon friendship

This little guy is a baby, so very playful and not easy to keep in the attention loop for long

…and already a social media star! 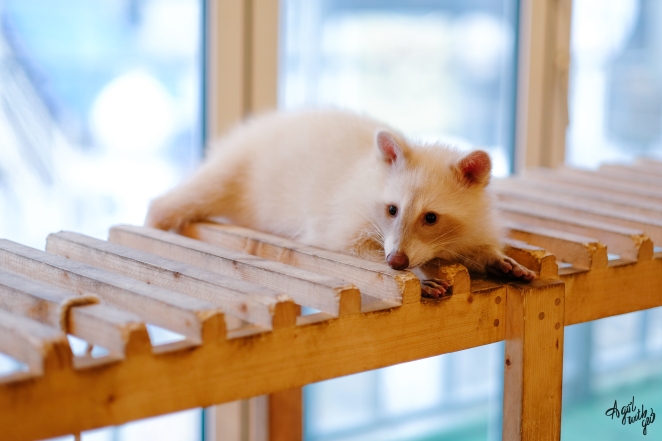 Not so friendly claws of the most friendly fur. Racoonamatata Cafe, Busan This racoon is a newcomer. He is going through some time to adapt to his new home in a special part of the cafe where people can’t get to him for now

Aren’t they great? Boosted my mood up for months to ago.

And that’s me, during the weekend